The new generation sequencers have become instruments of choice for in-depth analyses in the field of biology and medicine, especially the precision one. These tools allow a new and more global approach to a series of applications such as de novo sequencing, metagenomics studies, epigenomics, transcriptome sequencing and genome re-sequencing.

The latter application (re-sequencing) is very widespread in the human field both for research and diagnostic purposes and consists in the sequencing with NGS (Next Generation Sequencing) technology of an entire individual genome in order to map single nucleotide mutations (SNP, pronunciation ‘snip’), insertions and deletions of more or less long sequences occurred in certain positions of the genome and variations in the number of copies of portions of genome / genes (CNV, Copy Number Variants).

This procedure is useful to understand the mechanisms of development of some pathologies in order to identify the directions for future clinical treatment, such as in the case of cancer. With this method, in fact, the genetic heritage of a cancer patient can be completely decoded in normal and tumour tissue, allowing to understand what has changed in the genome and, if possible, to intervene with targeted protocols.

The re-sequencing procedure requires that an individual’s DNA is mechanically broken into small fragments (400-500 base pairs) and that fragments are tied to artificial DNA tracts called adapters, which allow to bind the fragments of Human DNA to a glass surface on which the bases are then read (A, C, G, T). The DNA bases are read by incorporating chemical reactions of nucleotides labeled with fluorescent molecules. The millions of sequences (reads) obtained from sequencing on the glass surface, are then mapped on the human reference genome with appropriate software and then all the variants present in the analysed genome are identified, with respect to the reference.

This same procedure was performed on the human genome present in Priorix Tetra lot. n. A71CB256A, genome belonging to the MRC-5 cell line (of foetal origin); the work was carried out at a company located in the USA, which routinely deals with analysis of human genomes by re-sequencing. *

* The name of the laboratory that performed this analysis will be included in the next statement that we will deposit with the Public Prosecutor’s Office in Rome as well as with the Italian and European control bodies. The realities that are depositing the results of the analyses financed by Corvelva will also be immediately updated with these puzzling results. We do not deny that, as parents in the first place, we are distressed by the results that we report below – if what we have discovered so far was not enough.

The human reference genome was found to be covered by reads originating from the vaccine DNA for 99.76%, therefore for almost all of its entirety. The foetal human DNA represented in this vaccine is therefore a complete individual genome or is present in the genomic DNA vaccine of all the chromosomes of a male individual (and in fact the foetus from which the MRC-5 cell line derives is male).

Below are the results of the analysis of the various types of variants with respect to the human reference genome.

The variants of single DNA bases (SNP, pronounced ‘snip’) are polymorphisms, that is variations of the genetic material, borne by a single nucleotide. The ‘InDels’, on the other hand, are small insertions and deletions of less than 50 pb in length and constitute another class of genomic variants in the human genome.

The amount of SNP is in line with what is reported in the literature in a “typical human genome” while the indels are in a higher quantity than what is reported by the “The 1000 Genomes Project Consortium” or 800 thousand compared to 600 thousand.

Copy number variants (CNV) are genomic variants due to variations in the number of copies of relatively large fragments (longer than 50 bp) between individual genomes. There are two types of CNV: type “gain” (gain of copies) and type “loss” (loss of copies). 218 CNVs have been detected in the human vaccine genome, 82 of which are “gain” type (covering a portion of the genome equal to approximately 6.9 million base pairs) and 136 “loss” CNVs (which cover a portion of the genome about 70 million bases).

As observed for short INDELs, even in the case of large insertions and deletions, the vaccine genome is therefore not in line with a ‘normal’ human genome, being much more “rearranged” than a genome of a common individual. 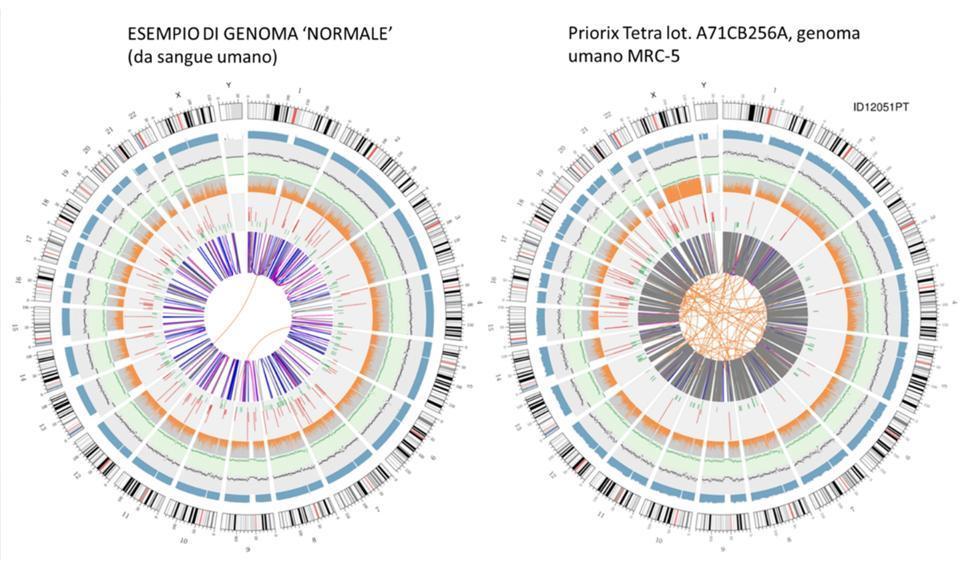 Meaning of the various concentric circles

6) The sixth ring represents the inference of CNV (Variants in number of copies). Red means gaining pieces of DNA and green means loss.

5) The fifth ring represents the proportion of SNP in homozygosity (orange) and in heterozygosity (gray) in histogram style.

4) The fourth ring (green) represents the density snp in a “dispersion graph” style.

3) The third ring (black) represents the density of the INDELs in a “dispersion graph” style.

2) The second ring (blue) represents the coverage of histogram-style reads.

1) The outer circle (the first circle) is the chromosome number.

A rough comparison can also be made between foetal DNA and HeLa cell DNA, the immortalised cell line also used in the production of the polio vaccine. 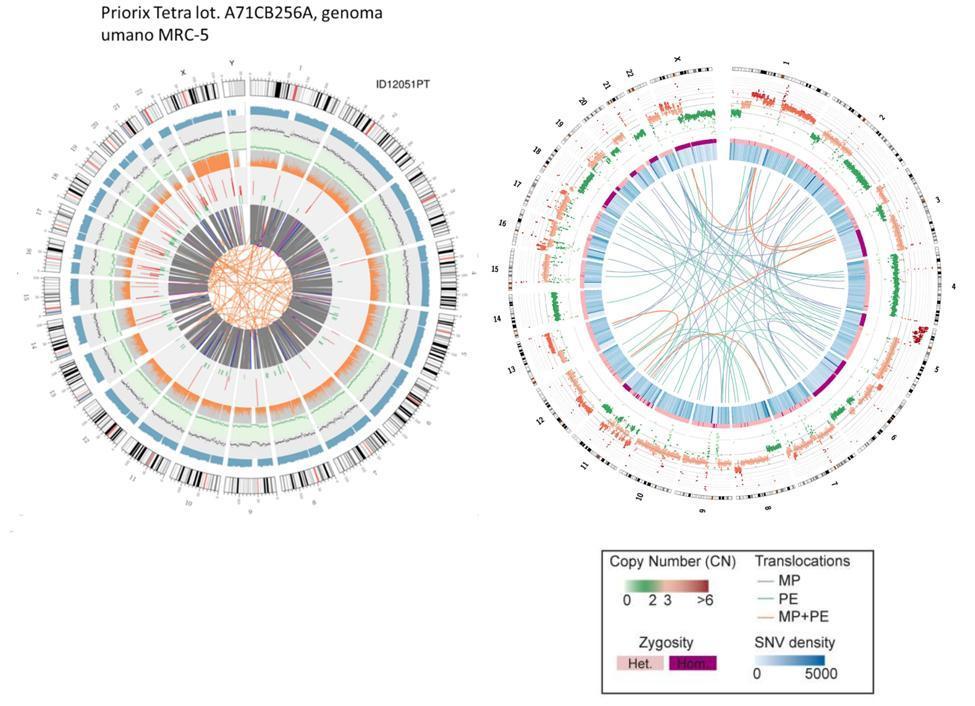 It should be emphasised that the translocations of the HeLa cells represented in the circos plot by the nucleus lines refer to the entire genome (therefore coding and non-coding part), while in the case of foetal vaccine cells they refer only to the coding genes.

You don’t have to be a scientist to understand from the circos, simply at a glance, that the vaccine genome is not a genome that can be defined as “normal”. The orange lines intertwined in the centre of the circos, not so numerous in the corresponding ring of the “normal” genome, already make us guess the anomaly of this genome.

The human genomic DNA contained in the Prorix lot vaccine. n. A71CB256A is evidently anomalous, presenting important inconsistencies with respect to a typical human genome, that is to say that of a healthy individual. There are numerous unknown variants (not noted in public databases) and several of them are located in genes involved in cancer. What is also evidently anomalous is the excess genome which shows changes in the number of copies (CNV) and structural variants (SV), such as translocations, insertions, deletions, duplications and inversions, many of which involving genes.

The potential contribution of the many variants (not present in the scientific literature and in public databases) to the phenotype of the cells used for the growth of vaccine viruses is not known.

Further Study
WHO Memos 1972 Explains How To Turn Vaccines Into A Means Of Killing
Evidence The COVID-19 Pandemic Is False
Cancer epidemic due to the introduction of viruses through vaccinations, SV-40 on trial
A micrometabolic inhibition test for the estimation of poliovirus neutralising antibodies
Cutaneous responses to smallpox revaccination with calf lymph and the effect of fluorocarbon purification of the vaccine
A second international cooperative investigation into thioacetazone side effects
Report of the 1966-67 cholera vaccine trial in rural East Pakistan
Bankers, Scientists, Holistic Doctors, The Dead List